In September of this year I visited Havana, to take part in a Shakespeare Festival, Shakespeare400. The initiative is the work of a dear friend and colleague of mine, Sarah Finch. Sarah began working in Cuba 6 years ago with the students at ENNA (Havana’s equivalent of RADA). Sarah teaches and directs Shakespeare and sowed the idea for a Shakespeare Festival when introduced to The Cuban Arts Council and The British Embassy on her first visit and the idea was embraced. The festival is now in its fourth year and has grown considerably. I took an interest in what she was doing and asked if she needed any help. The answer was, and “Yes, the festival is growing”, she said, “but I am still the only person left to organise it……..all.” 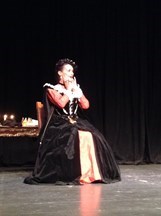 I know quite a bit about putting on festivals in the UK, but creating one in a communist country was something entirely new. At least this year the actors were not followed everywhere by the Secret Police, as Sarah had been during her first visit 6 years ago. We were provided with a state driver, who drove us to all our different work locations. I am sorry to disappoint those who associate Havana with the glamorous American cars of the 50s. Of course they exist, lined up outside the hotels in the Old Town like sweets in a candy store for the many tourists to drool over. We had no such glamour though. Our vehicle was a 6 seater clapped out minibus of great age, that kept breaking down, had a screwdriver acting as an indicator and belched out fumes.

Our driver, Eduardo, like many Cubans in employment, earned about 10 dollars a month (the same as a doctor, or a teacher and yes, a state actor) and is employed to drive for the Arts Council. You can recognise the government cars, because all their number plates start with a B, whereas private cars begin with a P.Unlike Sarah’s first visit 6 years ago, when her accommodation was a bed in a cell in’ a government building’. The cell was locked overnight and opened in the morning when she was offered luke warm coffee and a plate of tiny spam squares with a dot of cheese on top,I stayed in a hotel. “Things have improved enormously”, she tells me,” over the past 6 years.” She was still staying in government approved accommodation this time. An elegant, though crumbling, 1920s Spanish-style villa in the Verdado. The windows in the dining room were beautifully crafted, orange and black Art Deco stained-glass from Tiffany’s, belonging to a time when money dripped from every corner of Havana.

During the festival I delivered a conference on Elizabethan costume at the Design Museum. It was the first time I had worked with a translator and I thoroughly enjoyed it, if nothing else, it’s gives you time to think what you are going to say next!. 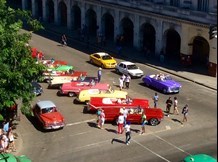 I had brought the period costumes with me from the UK. One complete outfit took up the whole of one of my large suitcases; farthingales and hooped skirts are not really designed to be crammed into modern cases! In addition to this, our small company staged two performances of Shakespeare’s work in a packed out theatre and received standing ovations for both. We also delivered a Masterclass on how to use the First Folio to unlock text.

You may ask why a country that has been deprived of economic expansion for over half a century needs Shakespeare. The answer lies in the status that education, and specifically the Arts within education, holds in this most unusual of Caribbean islands. Schooling and university is free and open to all. Acting is revered as a worthy profession (er, yes). The students at ENNA had selected throughout the whole island by the state by talent scouts and trained for 4 years before being given places in state run companies. And Shakespeare’s texts are old enough not to threaten current political thinking, perhaps. Cuba is opening up and changing. It needs change. The place is crying out for investment. I only hope the Arts retain their high status when that change comes. Art, after all, should not have to justify itself, least of all to the auditors (the modern blight of Art in the UK).

On an amusing note a friend of mine said, “it’s a long way to go to do fringe, darling!”
The Arts Council and the British Council want us to return next year to take part in The International Theatre festival. I hope that I can take up the offer, fringe or not.